The Kyiv State Institute of Decorative Arts and Design named after Mikhail Boychuk was founded in December 1999 on the basis of the Kiev Art and Industrial College. However, the "young" institute can not be considered, because it is based on the old traditions of Ukrainian national art. The institute begins its pedigree with the Drawing School of Mykola Murashko, the Kyiv Art School (1900-1920) and the Kyiv School of Applied Arts (1938 - 1957), which became the first professional school for such light-emitting Ukrainian painters as Nikolai Pymonenko, Alexander Murashko, Ivan Їжакевич, Foty Krasitsky, Kazimir Malevich, and later Alexander Arkhipenko and Ivan Kavaleridze, Anatoly Petrytsky and Oleksandr Ekster and painter-boy chemist Ivan Padalka and Vasyl Sedlyar.

The first winner of the prize is Kateryna Bilokur M. Timchenko, the People's Artist of Ukraine M. Prymachenko, I. Skitsyuk, I. Gonchar, T. Pata, M. Mukha, P. Glushchenko, N. Vovk, P. Vlasenko to the establishment and development of the educational institution. , O. Kulik and many others.

The original Ukrainian art school of arts and crafts and design, which is the basis of contemporary Ukrainian culture, is confirmed in the walls of the institute.

The works of pupils and teachers are kept by museums of Germany, Australia, the USA, Canada, Italy, Poland, Russia, Romania, Hungary, Japan, Syria, Czech Republic and other countries. Teachers and graduates of the educational institution are authors of numerous works of art, their compositions are decorated with interiors of the palace "Ukraine", VL Vernadsky National Library, Kiev railway station, metro stations "Golden Gate", "Minsk", metro stations "Khreshchatyk" "(Ceramic panels), the Kyiv Museum of Medicine (Tripot's" Holodomor "). Among the teachers of the institute are those who participated in the revival of the Kiev shrines: St. Michael's Cathedral, the Assumption Cathedral of the Kiev-Pechersk Lavra, the monument to Princess Olga, Yaroslav the Wise; authors of monuments to Vladislav Gorodetsky, Leonid Bykov, park sculptures.

Next to Kyiv State Institute of Decorative Arts and Design. M. Boychuk

Outdoor training: where to go in for sports in Kyiv
#Collections#Recreation 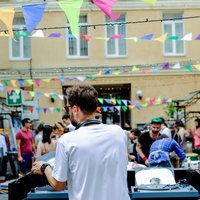